There’s a long old story behind this half marathon and it’s going to take a while to tell you, so grab a cup of tea and a biscuit (I recommend Foxes Crunch Creams or chocolate HobNobs) and settle in…

When we moved to Eigg last year I was feeling partly delirious with excitement and partly invincible.  Clearly it was therefore a great moment to tackle that item that’s been on my To Achieve This Year list for the past two years – an ultra marathon.  Of course I wasn’t planning to tackle it right then and there, but I did enter the Hoka Highland Fling, a 53 mile ultra marathon that takes in the first half of the West Highland Way on 30th April.  The WHW begins in Milngavie (weirdly pronounced Mulguy, as I found out later) and ends 90+ miles later in Fort William.  The Fling itself finishes in Tyndrum.

After entering, I put it to the back of my mind and got on with the business of settling into life on Eigg and running Eigg Adventures.  Before I knew it, I’d blinked and it was suddenly February and the Fling was sneaking up on me… I hadn’t run with any sort of regularity since the year before and it had been a hard couple of months.  My birthday falls in January and it was the first time I’d ever not been with my family on my birthday.  In addition, I’m always a bit gloomy at the start of a new year, something about it makes me feel like I have a metaphorical mountain to climb to get through the year; quite a negative way of looking at it, but it wears off as the year goes on. One day I really need to address this and sort out my mindset!  Anyway, I digress.

So, it was February.  I was sad and feeling a bit lonely and a bit (very) unfit.  What do you do? You send out an all-island email and beg for people to come run with you.  Luckily, a few people responded and the Eigg Run Club was born.  This was the first time I really felt like I was making friends on Eigg.  Don’t get me wrong, people here are lovely and I was really enjoying getting to know them all, but ERC helped me feel like I was making friends of my own, rather than getting to know people as ‘Owain and Laraine’.

Some weeks later, the run club had ebbed and flowed and settled with three hardcore members, me, Katrin and Sadie.   We were running regularly and having a lot of fun.

Just one small problem… this 53 mile ultra marathon.  I was waking up around 4am each morning, thinking about the distance, the logistics of getting to the start line, the cut off times.  I’d run through my time at the 50 mile Long Mynd Hike and try and work out if the elevation and terrain were similar and how much faster I’d go if I were running the downhills.  I was going over my last marathon time and trying to work out if I could squeeze in the 3 x marathon time the organisers suggest is reasonable for the Fling.  For reference, the cut off time is 15 hours.  I completed the Long Mynd Hike (hiking, with a heavy backpack, and with three hours sat in an ambulance with hypothermia) in 22 hours.  My last marathon was 5 hours, 23 minutes on a relatively flat course – untrained.  In short, my mind was buzzing and I wasn’t getting a lot of sleep.  Along with all this, I couldn’t figure out if I actually wanted to do the ultramarathon or whether I’d just got a bit carried away  by the achievements of the people I follow on Instagram and Twitter that made me feel like life wasn’t enough if I wasn’t running/cycling/climbing crazy distances/heights…

Eventually, I got a grip on myself, cancelled my spot in the ultramarathon and decided to do what made me happy; the Eigg Run Club girls and I entered a local half marathon which was conveniently taking place on the same date and we started planning in some long runs. 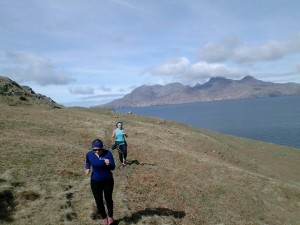 Training; an 11 mile run round the ’empty quarter’ of the island

During this time, we were running all over the island.  We got to see some spectacular places that very few people go.  We got faster, we got stronger and we got better on tricky terrain. The date of the half marathon grew closer and we came up with our plan for the weekend; to leave the island on Friday, wild camp at Morar, run Saturday, wild camp Saturday night and then head home on Sunday.

The weather was beautiful and we were looking forward to camping, then three days before the race we woke up to six inches of snow.  In April!

Some panic ensued but luckily it all cleared off fairly quickly and two days later you’d never know it had snowed.  Quite some time was spent walking around with a bemused expressed, frequently exclaiming ‘WTF?’.  In fact, most of the islanders did this.  Apparently it hasn’t snowed this much in a generation!

Another minor panic ensued when I collected the bag which Owain said contained the tent.  It turned out it contained his old rugby kit, and the tent was, in fact, in a similar bag in his mother’s loft, some 500 miles away…  Another tent was sourced and without any further mishaps we headed off on the boat.

(I told you this would be a long one, we haven’t even got to the race yet!)

Arriving on the mainland, we picked up a car and drove a few miles down the road to Morar, known for it’s beautiful white beaches.  We found a lovely quiet spot on a small peninsular, pitched the tent and proceeded to watch the sun set whilst eating fish and chips, and drinking beer.  Lovely.  (Though perhaps not the recommended way to prepare for a half marathon…)

Regardless, we all slept well and woke up early, with just enough time to take the tent down before the inevitable Scottish rain started to shower down.

We parked the car in Mallaig, and headed off on the train to Beasdale with 47 other runners, jittering nervously as the train was delayed by nearly 20 minutes.  We didn’t twitch too much; since there were only 50 people entered in the race, they weren’t going to be starting it without the train arriving!

Beasdale is a tiny little station, in fact, it’s actually a request stop.  I think that’s probably the busiest it’s ever been!  Whilst part of me isn’t so keen on small races (mainly because there’s a very good chance I’ll be dead last), the other part of me loves races where the director gives out some instructions, shouts good luck, then counts us down, 3, 2, 1 GOOOOO!!!!!!

And we were off.  The first mile was all downhill so the field shot off quickly.  I was last before we’d even hit 500 yards.  But what goes down must come up and the second mile was uphill the entire way.  All those hills we’d slogged along on Eigg worked their magic, and I overtook the penultimate runner on the hill.  The next few miles flew by without incident, though I didn’t see another soul until I was heading towards mile 6 round Traigh Beach, more beautiful white sands.  In fact, the whole route was beautiful, running along the coast with stunning views over the sea to Eigg and Rum.

I managed to keep myself running, plodding up the hills, letting my legs go down the hills and by mile 9, I passed another four runners.  I was pretty chuffed; each time I overtook someone was on a hill! I was feeling a little smug, I’ll be honest.  Mile 9 though, and my legs had had enough of hills and I had to start walking the hills.  I kept my speed up down hill, and my quads thanked me for all that training.

Mile 11 and I passed another two runners and saw a welcome sight ahead of me; my teammate Sadie! We yelled and waved, and then she carried on running on hills which defeated my far less strong legs.  The race, as a whole, went by so quickly!  I couldn’t believe how much I’d enjoyed every second of it, so even when the last mile went uphill – very steeply – I ran with a big grin on my face.  I even had the energy for a little sprint finish as I crossed the finish line in 2 hours, 29 minutes. Only 6 minutes behind my PB, which was set on a completely flat course. I was pretty pleased with myself. 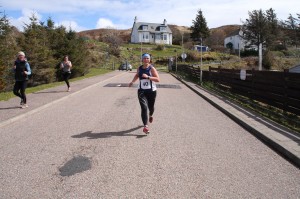 Happy Rainy! Sprinting towards the finish line with Katrin and Sadie cheering me on

Sadie had come in two minutes ahead of me, and Katrin? Well, Katrin had taken off like a rat out of a trap, and despite stopping to natter to all the volunteers at each water point, she’d come in 5th female in an amazing 1 hour and 50 minutes – her first ever race!!!! 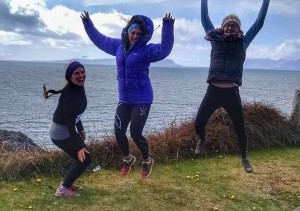 Happy Eigg Run Club, with Eigg in the background

The finish of this race was the best ever – a number of volunteers were waiting to provide us with unlimited (and free) tea, sandwiches, soup and cake.  It was amazing! We drank and ate our fill of sugary things, and then went to zonk out in the sauna.  (I should mention the finish line was at the leisure centre in Mallaig and they kindly offered everyone free entry into the pool and sauna!)

Sometime later we dragged our dehydrated bodies from the sauna, and decided to do the sensible thing.  We headed straight to the pub. We weren’t the only ones to have this idea and we met up with three other girls who had taken part in the race, and we spent a happy afternoon chatting away, enjoying meeting new friends.  Before too much longer though, hunger was calling and we made our way to Arisaig, a gorgeous little marina village, where we pitched our tent on a patch of grass overlooking the sea, and headed straight to yet another pub where we ate steak pie and drank some more beer.

Energy didn’t last long and by 10pm we were tucked into our tent, ready for a night of rest.  Alas, it didn’t quite work out that way as torrential rain fell, and our hasty tent pitch had turned out to be a bit wonky.  Poor Katrin ended up stuffed in a corner of the tent, in a puddle of water, with Sadie and I falling on top of her.  Not a peaceful night! We survived though, before making our triumphant return to Eigg on the ferry, to a heroes welcome!  One of the many good points of living in such a small community is that everyone knew we had gone to run a half marathon and we had so many lovely comments from everyone.

So, there’s the story of the half marathon.  I think it’s actually taken me longer to write this post than it did to run the bloody race!

By the way, I highly recommend the Road to the Isles Half Marathon.  If you like hilly course with spectacular scenery and free cake, then it should the top of your To Do List!