Just before we left Eigg to head back to Shropshire for Christmas, I happened to spot a mud run taking place on 27th December just outside Shrewsbury, which is only about half hour away from where we staying with my sister.

I asked for willing volunteers to join me in signing up and my buddy Kim was quick to let me know she’d booked on the race too! I say race, we agreed very early on there was to be no racing on any sort.  This was a bimble with lots of giggles along the way.  In fact, we decided to call our team of two The Bimbles.

The run was arranged by Ultimate Fitness based in Shropshire and this was billed as The White Run, the idea being to wear white and then get as muddy as you can during the run.  We took ourselves off to Primark and kitted ourselves out with white t-shirts.  Kim was a little more sensible than me and stuck to black leggings, whereas I decided to go all out and purchased a pair of white jeggings.  FYI – I hate that word with a passion.  Said jeggings were clearly designed for much younger much slimmer people and had a waistband somewhere down by my crotch.  £7 down though, I decided there was no way I was battling the Christmas crowds in the town centre again to return them, and as there was also no way I would ever wear them in a normal situation I was not going to waste my £7 and so I wore the jeggings.

The dyay of reckoning arrived and we headed to Shrewsbury with our husbands in tow, both bundled up against the cold far more adequately than Kim and I, and prepared with cameras to catch us in our muddy glory. 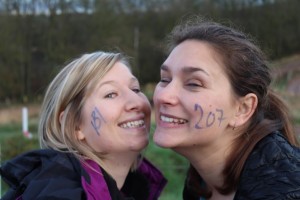 Squeaky clean and showing off our race numbers

We stood around in a little huddle for a while, waiting for the race to begin, and enjoyed the sights of nuns, paper boiler suits and wedding dresses mixing with the serious cross country runners…

Before too long it was time to start the race and we were shepherded down a muddy hill towards the start line, where we realised Kim probably didn’t have the best shoes on as she slid down the hill, squealing loudly.  Very very funny.  I was wearing my trusty Salomon Speedcross 3’s and figured very quickly they were going to be worth their weight in gold on this course.

As the klaxon went, we set off at a pace of nothing… we were both up to ankles in sludge and didn’t actually move.  A short wrestle later and we were both free of the mud and we were on our way, laughing hysterically already.

The 5km course continued on this vein; lots of laughs, lots of screams, lots of mud and lots of very deep puddles.  It was the most fun I’ve ever had in a race.  Absolutely bloody brilliant.  Except when I slid down a mudslide straight over a tree root.   Then it was just bloody.  And bruised. Ouch.

Kim ended up a little more bruised since her grip free trainers meant she spent most of the time on either her face or her arse as I hauled her up the hills, whilst thanking the makers of the supersticky Speedcross. 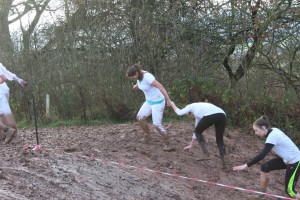 One of Kim’s many struggles up hill…

The course curved around, following a motox track with a few side excursions.  This meant there were plenty of opportunities for Owain and Adam to snap pictures – generally unflattering but with the odd gem! 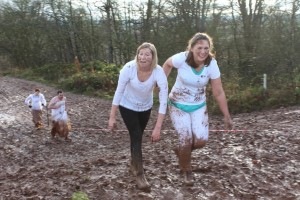 The jeggings did actually hold up a little better than expected, once they were soaking wet and stuck to my skin.  The first kilometre was spent waddling along and holding them up but after that they settled down and other than exposing my arse as I was hauled out of a waist deep pond, there were no really embarassing moments.  By that point, I was so covered in mud, I wasn’t too fussed! 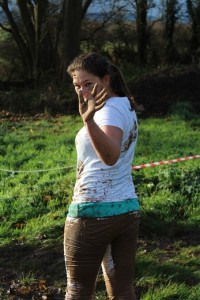 What you look like from the back after a mudslide

The 5km took us somewhere round the hour mark to complete.  It wasn’t a timed race and neither Kim nor I had any interest in timing ourselves.  The aim was purely to enjoy it and we certainly did that. 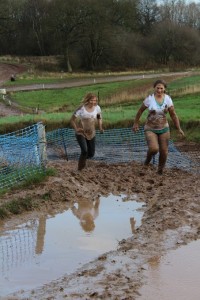 Running for the finish line

The fun didn’t end even after the race!  The car park (muddy field) didn’t offer much in the way of changing facilities so we just copied everyone around us and stripped down to underwear while Owain chucked cold water from a bottle at us.  We toweled the worst of it of before getting dressed into joggers and fleeces and headed straight for the nearest McDonalds.  There was a small debate where I was determined to stick to the drive through to avoid being seen with mud all over my face and slicked in my hair (also the dodgy outfit; 2XU compression tights with pink fluffy socks…), but the others won out when they suggested it was probably more hygenic to go inside to eat so we could all wash the mud off our hands before eating. In fairness, no one actually looked at me once we were inside.  All the other customers were too busy staring at Kim who had forgotten her spare trainers and went in just in her socks…

All in all, an absolutely brilliant day! Thanks Ultimate Fitness.  If you live in Shropshire, I’d highly recommend checking out their events.  I’d definitely be along to more of them if I hadn’t just moved 500 miles away, just as I discover my love for mud running!

Huge thanks Kim for being a brilliant mud run buddy, and thanks Owain and Adam for being great cheerleaders and photographers. 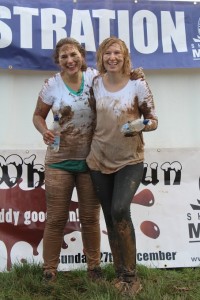