You know when you see something on the internet that just clicks?  Well, earlier today I saw this on Twitter.  No idea who it is, but something about just made sense to me. 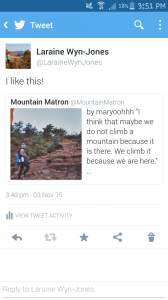 Before moving to Scotland, I worked in a job that was all about solving company issues.  It was ‘thinking and working differently to find the right outcomes’.  Honestly, I wasn’t very good at it, I didn’t spend enough time thinking differently and was too solution focussed apparently.  That was fine; I knew it wasn’t for me and if it wasn’t for my experiences in a number of jobs, then I wouldn’t be sat on the Isle of Eigg now.

Anyways, in this previous role we had things called ‘axioms’, or ‘truisms’.  Some were interesting and made you think, some were just bullshit.  One in particular was ‘you can’t get there from here, but you can get here from there’.  We used to spend hours discussing these axioms and what they really meant.  This one generated all sorts of discussion; was it all about only being able to start a journey if you knew where you were going? Was it a play on words? That you have enough letters in THERE to make HERE, but can’t do it the other way round?  Yep, this was one that I thought was complete bollocks.

But today on Twitter, I’ve seen something that basically says the same thing but in a format that I just get. In a purely physical sense, mountains have always been there around me, but I wasn’t interested in climbing them.  It was only when I discovered a love for the outdoors that I went to find said mountains, and found how much I loved being in the hills and climbing.

In a much bigger sense, the opportunities that have come my way since leaving proper employment, have they only been noticed because I’ve put myself in a position where I can see them and can take them up?  Where these opportunities always there, and I was just too busy in my normal life with a full time job to look around at what else was there?

Maybe I can only look back at these axioms and ‘get them’ now I’m happier in life?

This is all rather deep for a Tuesday afternoon; think I’m on a bit of a high after an amazing run up An Sgurr this morning that involved loads of mud, sweat and swearing but had me grinning like a fool. 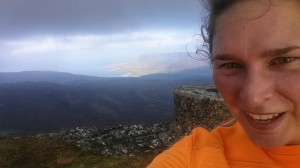 And to finish on another high, there’s only a week or so left to vote in the TGO Awards where I’ve been shortlisted for Outdoor Personality of the Year.  I’d love it if you could vote for me here! http://awards.tgomagazine.co.uk/tgo-awards/readers-awards-shortlists/