Simple things like heading to the Lake District for a few days become a lot more complicated when you live on an island and it’s winter.  Logging onto xcweather became a six times daily pastime for Owain and me, and when our planned date of departure starting showing an average windspeed of 55mph we figured we’d better make our escape sooner rather than later.  This meant leaving Eigg on Saturday, instead of Monday.  The good side was it gave us an extra couple of days at home with our family.  The downside was it meant driving past Kendal on our way down the M6 to Shropshire, before driving back up a few days later, driving back down the following day, only to head back a few days after that…  I don’t want to see the M6 for some time now.

Our time in Kendal was short and sweet; we arrived in torrential rain amid dire warnings from the radio about localised flooding, checked into our amazing B&B (Beech House – highly recommend), chucked on my new stripy jumper which I am seriously in love with, and we headed into town in search of food.

Things got a little weird for a short while.  I realised I was recognising a lot of the streets and places, and eventually concluded the Keswick Mountain Festival I swear I attended last November was actually the Kendal Mountain Festival… I clearly knew it was Kendal last year but since then my little brain has managed to change it to Keswick.

Anyways, we found ourselves a nice looking Thai restaurant and quickly ordered beer and chilli beef.  It was still early, only about 5.30pm so there weren’t many people in there, but some subtle eavesdropping determined the other tables of diners were also there to attend the awards.  In fact, one of them won – congratulations Pete’s Eats in Llanberis for winning Cafe of the Year!

Mouths burning, and breathing garlic fumes from our delicious dinner we headed to Burgundy’s Wine Bar ready for the awards.  We quickly made a dent in the free bar (amazing brewery and damn good rum) and settled in to listen to the amazing band they had on.  These chaps were bloody brilliant!  It was worth heading up to Kendal purely to listen to them. 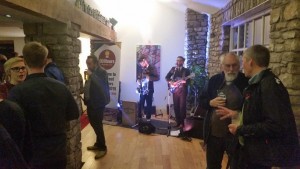 The awards ceremony kicked off with lots of cheers and clapping.  I was delighted Chris Bonington came in as Highly Commended in the Outdoor Personality of the Year Award, though I was gutted to realise he couldn’t attend the ceremony.  Sad times indeed.  I had all sorts of annecdotes and stories lined up to wow him with.  Next time…  The winner of the award was Kate Ashbrook, a tireless campaigner for open spaces.  Well done Kate!

Other notable wins went to Alpkit (woohoo, I voted for you!) who won Online Retailer of the Year, and the Clachaig Inn in Glencoe who were highly commended in the Pub of the Year.  Unfortunately, no one from the Clachaig Inn could attend the awards but handily enough we drive right past there on our way back to Eigg, so we snaffled their certificate with the plan to drop it off a few days later.

One of the highlights of the evening was getting to watch a sneak preview of Life of a Mountain: Blencanthra, a film by the very talented Terry Abraham, who last year smashed expectations with his film Life of a Mountain: Scafell.  Owain and I loved the film, so we were chuffed to not only see a glimpse of Blencathra, but also get to chat to Terry.  He’s a very nice bloke.

The evening wound up with some more tunes from the band whose name I didn’t catch, but loved anyway, before we headed back out into the rain to walk up Beast Banks (no joke) to our B&B where we ate biscuits and drank hot chocolate from the very well stocked hospitality tray in our room. Mmm.

Next morning we got up for breakfast and joined another couple at what we jokingly termed the ‘losers table’.  They were a really lovely couple from Crickhowell Adventure Gear who were shortlisted in the Independent Retailer category.  We had a good natter about the awards evening and the rain and various other subjects, and before we knew it, it was time to travel back down the M6 to Shropshire, once again.

The rest of the week passed quickly, with seeing our family and also collecting our new van, in which we chucked our furniture before back up the M6 (again) on Sunday.  We stopped, as planned, at the Clachaig Inn to drop off their certificate from the TGO Awards and decided to stop for dinner.  It was a good decision, it was damn tasty, and a lovely place with a great atmosphere.  I can see why they were highly commended!

The downside of stopping meant we drove through Rannoch Moor and then the road to Mallaig in the dark, which meant eyes on stalks looking out for the dopey deer who think jump in front of your car with no warning.  We made it without incident to Mallaig though, where we pulled out sleeping bags and settled down in the van for a good night’s sleep before arriving home on Eigg on Monday’s ferry. 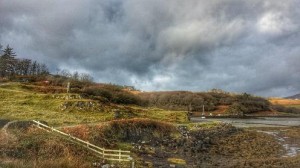 Unfortunately, we came back full of coughs/colds and general lurgy, so after unpacking our sofa and bed in the rain, we’ve both spent the last few days in dressing gowns and fluffy socks, draped over said sofa, eating chocolate.

Hopefully I’ll be back on form in the next few days and can get back to training for the Highland Fling!

Oh, and in case you wondered about the rest of the award winners, here’s a full list!  Well done all!

One thought on “The TGO Awards – The Winners”