Since moving to the Isle of Eigg, Owain and I like nothing more than having visitors arrive so we can show off this amazing place.  Though I don’t think we’ll ever take the beauty of the place for granted, having people arrive reminds us how spectacular it really is.

This weekend my adventure buddy Sarah arrived.  Sarah and I have done a lot of adventures together, they all involve strenuous physical activity (think trail running, mountaineering, long distance hiking) and they also tend to involve large amounts of alcohol (think raspberry flavoured gin mixed with prosecco.  It’s amazing, by the way).  Knowing Sarah as I do, I prepared for the weekend by going out for an experimental trail run the other day just to confirm I really am as unfit as I thought I was, and yes, it was confirmed.  After running all of two miles, I was dying at the side of the track.

Sarah is the one who roped me into signing up for the 53 mile Hoka Highland Fling, an ultramarathon which covers the first half of the West Highland Way in Scotland next May.  We figured getting some trail running in would not only be a great way to show Sarah the island, but it’s a good start on our training for the Fling.

Plans were to run up and down An Sgurr, the highest point on the island at 393 metres, followed by a run through the forest down to Laig Bay beach at the far end of the island before running back home along the road.  I guestimated it about 14 miles all told.  These plans were scuppered slightly by a Halloween party taking place at the tearoom on Saturday night… 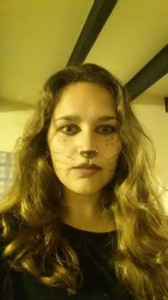 After large amounts of gin and tonic (Sarah) and rum and coke (me), our plans on Sunday got scaled back slightly.  We still made it up and down the Sgurr, which I’m delighted with.  Granted, we walked pretty much all the uphill but it’s still good training for the ultra and Sarah got to see the amazing views of the island, plus neighbouring islands of Rum, Muck, Skye and Mull, and I got to practice my downhill technical running.  We then popped home for a quick drink of water before setting off through the forest, which was wet, muddy and hilly – it was amazing! 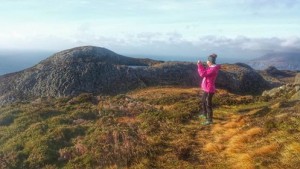 Sarah enjoying the views to Muck from An Sgurr

Sadly, after a couple of hours or trawling through bog and up and down hills, (as well as battling hangovers) we decided not to run all the way down to Laig Bay, but cut through the forest and back to the road after a couple of miles, and then marched back along the road home.  We used the excuse that we were both in trail running shoes and therefore roads are uncomfortable to run on, but being honest, I was hungover and my legs hurt! No excuses. 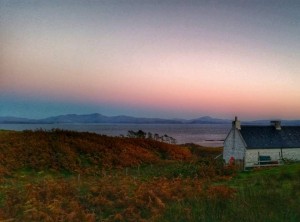 I love coming home from a run to this house and this view. Amazing

By the time we made it back home, we’d covered just under nine miles and around 1,700 feet in elevation.  A good start to Fling training, we thought! We finished the day off with a quick drive down to Laig Bay with Owain to watch the sun set.  A brilliant way to show off the island, and spend time with a great buddy!  Thanks for coming over Sarah. 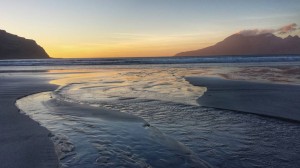 Sun, sea, sky and Rum. The island, not the drink sadly.

Oh, and on another note, Sarah nominated me for the TGO Awards Outdoor Personality of the Year and I GOT SHORTLISTED!!! Thank you Sarah, and thank you everyone who has voted for me so far.  The shortlist includes Chris Bonington, Andy Kirkpatrick and Alan Hinkes, as well as other accomplished outdoorsy folk.  I feel pretty lucky to even be shortlisted and I’m very excited for the awards ceremony in a couple of weeks at the Kendal Mountain Festival.