I read a fantastic article this morning about being a ‘soul runner’ as opposed to a ‘pb chaser’.  Here’s the article – well worth a read! Whilst reading, I immediately categorised myself as a soul runner – basically, someone who runs for the sheer fun of it, rather than wanting to continuously beat their pb.

Well, yes, that’s me.  I’m not interested in speed.  Good thing too really, since I’ve only once broken 30 minutes for 5k and have never yet managed to beat the hour for 10k, despite it being a goal for about four years now…

Reading further though, I realised I don’t run for the enjoyment of it.  In fact, being brutally honest, I hate running!  It hurts and I find it boring.  I really struggle to find the motivation to go out for a run, even when (like now) I have a marathon to train for.  I had to really think hard as to why I still enter these races, when there are so many other activities I could do instead.  I’ve realised that I absolutely love running in the hills with friends.  My friend Sarah is an extremely good hill runner who loves nothing more than going out on her own, exploring the Scottish hills.  Each time I see her photos, I think to myself that I’d love to do that, yet even when in Scotland I still can’t get the motivation to go out on my own.

The runs that I’ve really enjoyed have been those in beautiful locations with good friends, and have involved lots of chatting, lots of laughter and very little attention to pace! In fact, I can even narrow it down to three runs; the Lake District in December 2013 with Sarah and Rosie – freezing cold hills runs but utterly amazing; Shropshire fields with Owain – we got lost, climbed over fences and through nettles and laughed our socks off; and Lac Jovet in the Alps with Sarah and Rosie – the toughest run I’ve ever done, up a bloody big hill at altitude but again, just amazing! 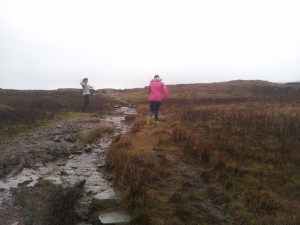 An amazing run in the Lake District – lots of rain, mud, hills and laughter

So why do I keep entering marathons which really require dedication to training?  God knows.  All I know is I’d dearly love to break 5 hours for the Loch Ness Marathon in October.  It’ll be my third marathon and I can’t wait!  I just need to work out how the hell I can train for it.

For my last marathon in May 2014 (Liverpool Rock n Roll) I did very little running due to injury.  The furthest I ran was 7 miles.  Instead, I spent a lot of time in the gym, lifting weights and completing circuits.  I was as strong as I’ve ever been and pretty fit.  It worked too, I loved the marathon and finished with such a buzz.  However, with our impending move to the Isle of Eigg in August, I won’t have access to a gym.  I’ve got a few bodyweight circuits which I can do, but sadly again my lack of motivation kicks in again – I hate working out on my own!

I guess the point of all this rambling is trying to work out whether I really am a soul runner, or if actually I’m just lazy…  No idea.  Now I just need to carry on searching the internet for that magic tool which will allow me to become a sub five hour marathon runner without actually running. Hmm.