Well, I’ve been rubbish at blogging recently! I had all sorts of plans to write a post about all the things I was proud of about 2014, the good stuff I’d done, the adventures I’d been on.  Then I had plans to write about my goals for 2015 and the new adventures I want to go. Then I didn’t write anything…

And then Christmas arrived, and it was amazing to have the time with family and go away for a few days with Owain for our fifth wedding anniversary. 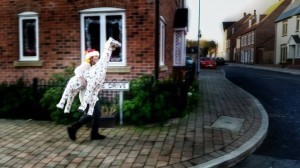 Aand then New Year arrived and we were in a bothy in the Elan Valley in Wales (freezing cold but good fun – blog post to follow) and then before I knew it, it was Monday 5th January and I was back at my desk, as if I’d never been away! 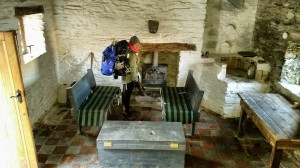 Ready to backpack out of the bothy on New Years Day

Now we’re halfway through the first week back and since 2014 feels like so long ago, I’m just not going to write about it.  Most of it has been covered anyway through my blog posts throughout the year so instead I’m jumping straight to what I have planned for 2015.

Big news!  I thought it would be a good idea to attempt an ultra marathon…

My entry into the Millenium Way Ultra happened last year during a particularly quiet day at work when an email popped into my inbox telling me about this 38 mile trail run across Staffordshire.  Being a little bored at the time, it obviously made perfect sense to book my place straight away.  After all March 2015 was AGES away.

Now it’s seven weeks on Sunday. Eek.  I’ve been really enjoying my trail running recently  but I need to get some serious mileage under my belt in the next month.  I don’t follow any sort of training plan, mainly because of the absolutely horrific shin splints (which have lead to at least four suspected stress fractures) so I’m going with the same plan I followed for my marathon back in May which basically involved no running and doing a LOT of intervals and weights at the gym.

It worked then.  Despite not running more than 7 miles beforehand, I ran a comfortable if very slow 5 hour 26 minute marathon with no pain or injuries.  This time I’ve thrown in one trail run a week.  Sunday is my day for going out for a mega long mega slow plod through the woods and across the fields, and I love it!  It’s not timed, I don’t even consider my pace, I just go at whatever feels comfortable on the day. I’m not expecting to break any records in the Ultra, I just want to finish it – preferably not on my hands and knees!

Today was my first day back at the gym in 2015 and I had a great workout consisting of deadlifting and squats.  I’m pretty sure I’m going to hurt tomorrow…