Wow, it’s been a busy November! It’s been a great month for getting out and about, but I’ve also been ill with a whole variety of colds, coughs, sore throats etc. hence the lack of blog posts. After all the activity there’s been a lack of energy left for writing about said activities, so here’s a round up of everything I’ve been up to.

A couple of weeks ago, I headed off to Snowdonia with the Shrewsbury Mountaineering Club. I’ve been out with them once before, and enjoyed the trip thoroughly. A recap can be found here. This time, the plan was to head to Tryfan for a grade 2 scramble. I love scrambling so was pretty excited about this trip. I was also very apprehensive. Honestly? I get nervous around people I don’t know, and I’m not great at making small talk – I was even worse at making small talk this particular weekend cos I’d lost my voice so as well as frantically trying to think of intelligent things to say, I’d then squeak and splutter and cough my way through what ever inane crap I was coming out with.

Regardless, the four others on the trip to Tryfan were all lovely folk, and kindly ignored my muppetness which manifested itself in initially forgetting how to tie in to a rope…

The scramble itself was interesting; I’d not climbed a grade 2 before and the pouring rain on this particular Sunday made it more of a grade 3. The others were far more experienced climbers than I, so we split into two groups with the confident folk forging ahead towards the summit of Tryfan, and me and a lovely chap who’s name I can’t recall pitching a lot of the route with me seconding. It gave me a lot more confidence and I really enjoyed the climbing. 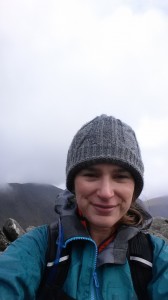 The day finished with a cup of tea and cake in a Snowdonia cafe, and I’d had a really good time. It had pushed me out of my comfort zone both physically and mentally. The climbing had stretched me, and meeting up with a group of people I didn’t know stretched me even further.

After such a scary (in many ways) weekend, the following weekend I went firmly back to my comfort zone; running – and for good measure I took Owain along with me! To be fair, we did push ourselves. I haven’t run for a good few months and O hasn’t run properly for over a year. We decided to go off road and started following the Shifnal Half Marathon route. It’s a stunning trail, and I remembered the first four or five miles with no problem. Then we got lost. And got back on track. And got lost again. We’d decided it’d be more fun to just investigate any and all trails we found, instead of staying on any road sections we found ourselves on. This led to field crossings, nettles, barbed wire battles and accidental trespass on someone’s private fishery! 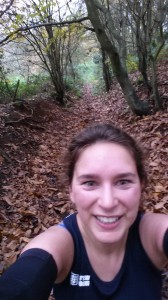 Eventually though, we started heading back to Shifnal and to my delight even after covering over 13 miles, I had enough left in my legs for a sprint finish down our road, ensuring I beat Owain back to the front door. This stuff is important! I absolutely loved the run, every second of it and I was delighted that I had no problems in covering the longer distance, despite my lack of regular mileage recently. I guess all those weights and hill walks have done their stuff with building up my cardio and leg strength.

Leading up to this weekend, I planned to do another long trail run but that was all I had planned. That all changed on Thursday with a text from my friend Rosie “are you heading up to the Kendal Mountain Festival?” Well, I hadn’t been planning to, but before I knew it, it was Friday evening and Rosie and I were sat in traffic in the joy that is the M6 at rush hour. Raining. Lovely.

We made it to Kendal without incident though, bar the accidental consumption of a couple of bacon double cheeseburgers and onion rings in Burger King and it wasn’t too late before we were ensconced in the beer tent, listening to a local blue grass style band and watching some crusties bouncing around on the dance floor. 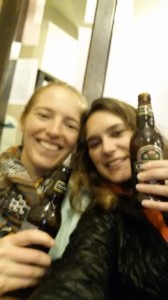 We got off to an early start this morning, fuelled by sausage and bacon baps, and began our day listening to a talk by Berghaus athletes Leo Houlding, Chris Bonnington and Steve Birkinshaw. What a trio! Leo and Chris in particular spoke very inspirationally, and surprisingly, very movingly. I wasn’t at all expecting the personal element of their talk, so it was a surprise that Rosie and I were both moved to tears on several occasions during their talk. Leo’s talk focussed on his close friend and climbing partner Sean ‘Stanley’ Leary, who sadly died this year in a BASE jumping accident. To see the climbs and the films Leo and Stanley had made together was far more intimate than I had expected, but really amazing to see, and feel a part of. It gave a very different perspective of the climbing world and the relationships built within it. 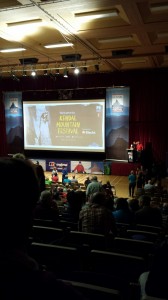 After the Berghaus session, we legged it across town to make it to the Lowe Alpine session, where we listened to a fascinating talk by Alistair Humphreys, coiner of the phrase ‘microadventure’. I’ve followed Al on Twitter for some time now, and his concept of making the most of the 5-9 (the hours you’re not at work) is one that led to Owain and I meeting a number of strangers in Henley earlier this year and then going to sleep in a wood…

Rosie and I both loved the talks we’d attended; a number of speakers, all amazing in different ways. Our whirlwind trip to the Kendal Mountain Festival was over though, and by 3pm after being fuelled by yet more burgers, we were back on the M6 heading back to the Midlands.

So that’s my November catch up – and I did go on that trail run this morning, but that’s a whole ‘nother post…

4 thoughts on “24 Hours of Whirlwind Adventure”