After finishing our Great Glen canoe trip several days earlier than we had estimated, we had four or five days on our hands, a tent, and a thirst for more adventure.

We spent some mulling over our options; we were both agreed we definitely wanted to stay in Scotland and we fancied a trip to an island.  Mull was discussed, we’d been mountain biking there the year before and both loved the place.  However, the ferry over is not cheap and we wanted to explore somewhere new.

O came up with a master plan; the Isle of Eigg.  I’d never heard of it until last year when Owain and the Swimming Britain team took shelter there for a few days during their expedition, but they’d all come away, raving about the beautiful island and the amazing folk they met there.  O had talked about it a lot, and had always promised to take me there.  The Isle of Eigg it was!

It’s a place with an interesting recent history; in 1997 after repeated clashes with the then owner of the island, the islanders in conjunction with the Isle of Eigg Heritage Trust bought the island in a pioneering move.  Since then, they’ve built the world’s first completely wind, water and solar powered electric grid. Pretty amazing!

Decision made, we headed from Dores towards Mallaig where we could jump on a ferry over to Eigg.  Unfortunately, we’d missed that day’s ferry so we trundled along the coast, drank tea, and walked along the beautiful beaches.

We found a stunning camp spot, literally 15ft from the road but overlooking a stunning white sandy beach, where we had our own little grass covered lump of rock, surrounded by sea as if we were on our own private island.  All around the cove were more of these grass covered rocky lumps; the one to our right was being camped on by three biker dudes.  It was a fabulous spot where we had another great night’s sleep.

At 6am we were up, the tent was down and we were back in Mallaig on the hunt for some breakfast before buying our ferry tickets and jumping on the Caledonian MacBrayne boat heading around the Small Islands.  We settled in with a cup of tea and chocolate muffins for our two hour trip over to Eigg.

The skyline of Eigg is stunning, and very easily recognisable.  It is dominated by An Sgurr, a pitchstone outcrop formed by a volcanic eruption approximately 60 million years ago.  Initially it appears sheer and only climbable with ropes – and more talent and experience than O and I have! However, O told me there was a path that wound round the back of the Sgurr and doubled back, taking you to the top where there was apparently a stunning 360 degree view across Eigg.  He’d heard all about it on his last stay on the island but hadn’t had the time to explore.

Arriving in Eigg, the first building you see is by the ferry terminal.  By terminal, I mean small (very) small harbour where the ferry docks.  Walking along the harbour, you arrive at the Galmisdale Cafe, Bar and Restaurant, a really lovely place for a cup of tea whilst enjoying the views out to see.  It’s a stunning spot, and I can highly recommend their sausage and bacon sandwiches and their homemade chips. Mmm.  We spent quite a bit of time in there, drinking tea.

In the same building is the local shop which sells everything, including balsamic vinegar.  If you want to hear a funny story about that, tweet @owynjones and ask him about the balsamic vinegar dare…  The building also contains public showers and loos.  It was great being able to get showered!  Ah, the small things that make you happy when camping!

We lugged our bags down the harbour – you can’t take cars over to Eigg so we were walking with our drybags which are most definitely not designed for walking with – and headed off down a track following the shore line through a wood and towards some fields a mile or so away, where we set up our camp with yet another stunning sea view.

We didn’t hang around long at camp.  We had a cup of tea at the Galmisdale Cafe and then set off on an expedition to summit An Sgurr! We started by going in the wrong direction and pissing off some sheep who were quite vocal about the annoying tourists in their field.  Undeterred, we carried on and managed to get ourselves on the right track.  It’s a moderate walk up with some interesting terrain and a few steep sections, followed by an easy scramble to the summit but my gosh, the views on the walk are just incredible.  If you visit Scotland, firstly make sure you visit the Isle of Eigg, and secondly, take the time to climb An Sgurr.

At the summit it was pretty breezy and the clouds were coming in, playing hide and seek with the views across Eigg. From here, cloud permitting, you could easily see the volcanic history of the island.

As you can probably tell, I fell in love with Eigg and spent a large amount of time trying to convince Owain that we could sell our house and move here, even if it meant living in a tent.  It’s just such a stunning place, completely natural and unmarked by tourism.  There is nothing manicured about it, it’s wild and quite desolate but even just by the next day, I felt a real pang leaving there.   In fact, just writing about it and looking back at the pictures is making me wish I was there now.

We celebrated our trip up An Sgurr with yet more tea and cake at the Galmisdale Cafe (we did our bit for the economy while we were there!) and prepared ourselves for the Ceilidh that was taking place that evening at the village hall.  By prepared ourselves, I mean we showered and then put on the same clothes we’ve been wearing for three days by then, and brushed off the mud we’d accumulated during our trek up the Sgurr.

I’d never heard a Ceilidh band before; I was looking forward to it, and I was not disappointed.  It was impossible to keep yourself from tapping your feet and I loved the dancing, and the community spirit.  By the end of the evening, after consuming large amounts of local whisky, O and I even took part and danced our first ever Virginia Reel!  Having kicked off my flip flops, it was impossible to stop grinning like a fool while we danced to the music which got inside you and made you stamp on the floor and clap your hands – not always in time, but with such enthusiasm, it hurt.

It was a perfect way to finish our holiday, and created amazing memories to keep me going till we return to Eigg. And I promise you, we will be returning. 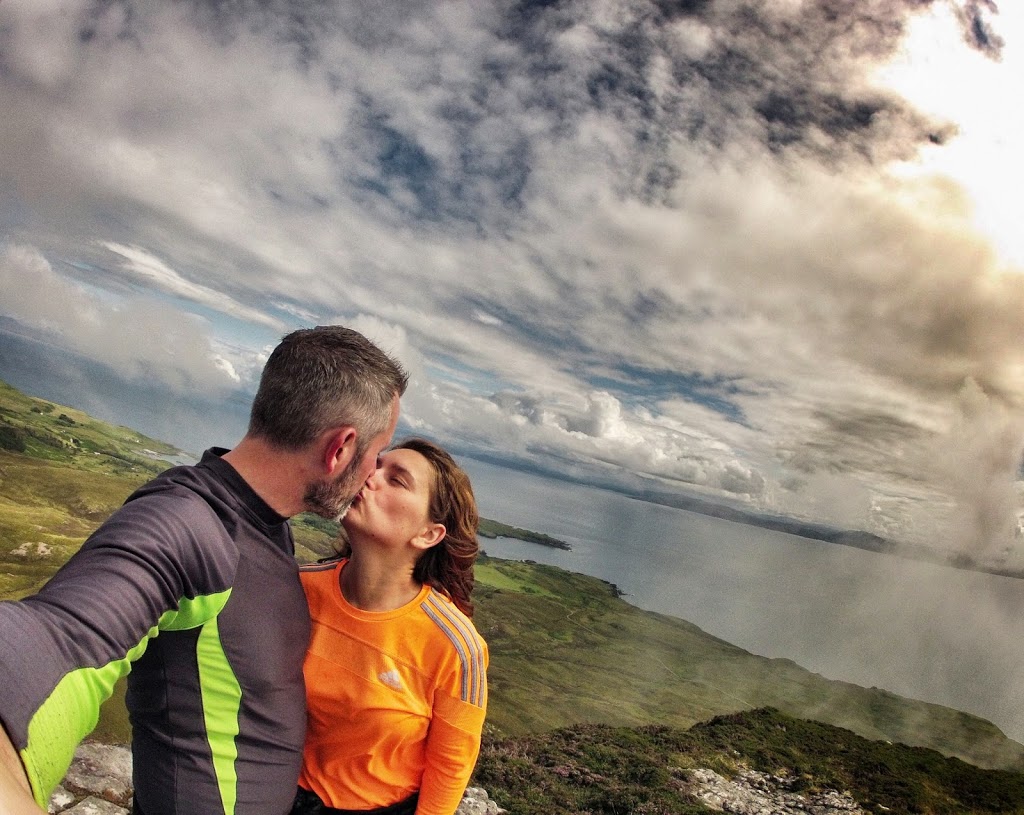