Remember a while ago my friend Charlie broke her ankle while we were bouldering? If not, have a look here. It’ll explain exactly why I was planning to spend my weekend learning practical first aid in the outdoors.

Well, it was finally time to head off to the Peak District to attend a 2 day Emergency First Aid in the Outdoors course! I was very excited! Rosie, a fellow member of Team 14 Peaks was coming along and we’d agreed to meet at the Youth Hostel in Youlgreave.

This was the first challenge… a cycling event was finishing in Youlgreave, and tired Rainy driving down very narrow roads, trying to find a very well hidden youth hostel, combined by bright sunshine blinding me and some tired cyclists weaving around on the roads trying to get up some very steep hills – well, it wasn’t much fun. I managed to dump the car in the village and find the youth hostel without running anyone over, so a successful trip so far!

Rosie and I caught up at the local pub for dinner, which served the best steak pie and chips I’ve ever had. Seriously. It was amazing. I think the pub was called the Farmyard, so if you’re ever that way, go and try out their steak pie. You won’t be disappointed!

Fuelled by ginger beer and steak pie, we headed back to our cupboard sized but comfortable room and got an early night in anticipation of the next day.

It was an early start and by 8.30am we were breakfasted and wandering through Youlgreave in search of the scouts hut that served as the location for the first aid course. We found it with no problems, and helped ourselves to the free tea and biscuits on offer. There were 16 of us on the course which was led by Will Legon of www.will4adventure.co.uk and supported by Paul Lewis of www.peakmountaineering.com. Both lovely chaps who kept us entertained throughout the course. Additional entertainment was provided by Will’s beautiful Spaniel, who hoovered up left over biscuits – and some that weren’t left over!

The first aid course was intense! We worked from 9am till 6pm each day on both theory and practical first aid, and got very up close and personal with each other while demonstrating our understanding of how to construct a splint from walking poles, and help someone suffering with hypothermia. 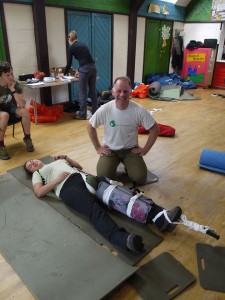 Getting treated for a broken femur, with a splint made of walking poles!

By Saturday evening, both Rosie and I were suffering from serious brain ache and decided that although all we both wanted to do was head straight to the pub for a pint, we would make the most of the beautiful location we were in and go for a trail run. Rosie was as organised as ever with the local OS map in her bag and found us a stunning route, heading downhill to the river, along the river, back up a really big hill (I walked some of it, feeling very ashamed, as Rosie powered on up) across some fields, down through a field of cows and then the last 4-5km was along the most beautiful trail, running next to a river. Underfoot, the ground was rocky and technical, keeping us both entertained. We passed some small waterfalls, several caves and spent most of the run exclaiming at the amazing location. It really was stunning, and I was so glad we’d decided to go for the run. I had struggled the first few miles with my calves tightening up and realised that bringing minimalist trail shoes was a thoroughly stupid idea. However, over the fields they eased off and I felt stronger the further we went. By the time we arrived back in Youlgreave I was on a serious high, and very ready for a pint and some more steak pie. 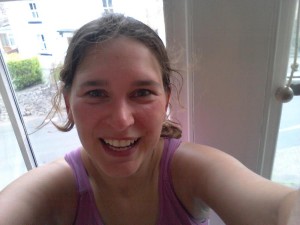 No, I’m not joking. We went back to the same pub and had the same meal. Steak pie and chips. Amazing.

It was a fantastic weekend, and I’m really pleased that I’m now qualified in Emergency First Aid in the Outdoors. I think it’s so important to know you can look after yourself and your team mates when outside, especially in remote locations. It’s given more confidence and whilst I’m keeping my fingers crossed I never have to use it, at least I know I’ll be a little more useful than I was to poor Charlie when she broke her ankle!